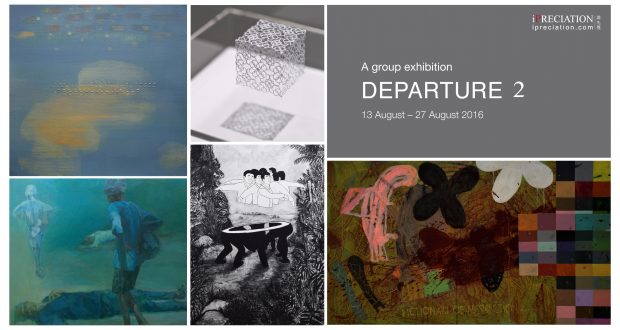 iPreciation is proud to present “Departure 2”, the second edition of the group exhibition that first started in 2014. This year, the group exhibition will be featuring the works of Betty Susiarjo, Ashley Yeo, Jon Chan and Ezekiel Wong alongside Milenko Prvacki’s most recent works. In tandem with 2014’s exhibition, the second edition of ‘Departure’ is based on the simple premise of exploring the works and development of the students of Prvacki at Lasalle College of the Arts, in their after-art-school period, having been exhorted by their master to depart and develop their own as artists. Hence, “Departure 2” will be a visual art exhibition that captures new generations of work representing different tangents of painting and art practices, concepts and ideas here in Singapore. This exhibition will comprise of a good range of media – from paintings to drawings to 3D work – with a mix of styles and ideas.

“Departure 2” is curated by cultural medallion, educator, and artist, Milenko Prvacki. He has taught art to many generations of young artists in Lasalle College of the Arts Singapore and has hand-picked some of his top students to exhibit with him this year at iPreciation. This exhibition affirms Prvacki’s involvement in Singapore’s Art Scene has extended beyond his artistic practice, but also through his mentorship as an art educator. His efforts to develop Singapore’s contemporary art are evident in the “Departure”

Betty Susiarjo is a mixed-media artist born in Indonesia and based in Singapore. She graduated with a President Distinction Diploma in Fine Art from Lasalle SIA Collage of the Arts, Singapore in 2002, and has since obtained her Bachelors of Arts (Honours) Fine Art, Master of Art (Fine Art) and Postgraduate Certificate in Education (Art and Design) in England from Surrey Institute of Art and Design, Winchester School of Art and Goldsmiths University of London respectively. Her works explore the concepts of temporality, materiality and beauty. Often incorporating craft through the use of embroidery and beads, into her works, her works evoke a sense of poetic yet ethereal beauty.

Ashley Yeo is a Singaporean artist whose practice is founded on drawing. Her works are reflections on the epidemics of visual culture and the complexity of human conditions, that stem from private thoughts and ontological questioning. She attained her Bachelor of Arts (Honours) Fine Art from Lasalle Collage of the Arts, Singapore with first class honours and completed her Masters Degree in Fine Arts at Chelsea College of Art & Design. She has also been the recipient of Lasalle Award of Academic Excellence in 2011, Winston Oh Travel Award in 2010 and NAC Scholarship (local) in 2010.

Jon Chan is a Singaporean painter who explores the dimensions between unsolicited real-time performances and their meditation and circulation as images, attenuating any parallels between these two domains. His works in this exhibition will draw inspiration from his interest in comics as well as real-time situations. He attained his Diploma in Fine Art (Painting), Bachelor of Arts (First Class Honours) and Masters of Fine Arts in Lasalle College of the Arts Singapore, and has been awarded the Winston Oh Travel Award in both 2003 and 2007. He has also been a recipient of the JCCI Arts Awards in 2007.

Ezekiel Wong Kel Win is a Singaporean artist known for his sardonic wit and humour. His works contain elements of satire that highlight societal conflicts, geopolitical issues and his own personal confrontations. He holds a Bachelor’s Degree in Fine Arts (Honours) from Lasalle College of the Arts, Singapore-Goldsmiths, University of London and has been awarded the Affordable Art Fair Young Talent Program Solo Exhibition Award, Singapore in 2014/15 as well as the Future Leadership Scholarship in 2013.